“Nuclear Physics”: Imaging into the Heart of a Cell 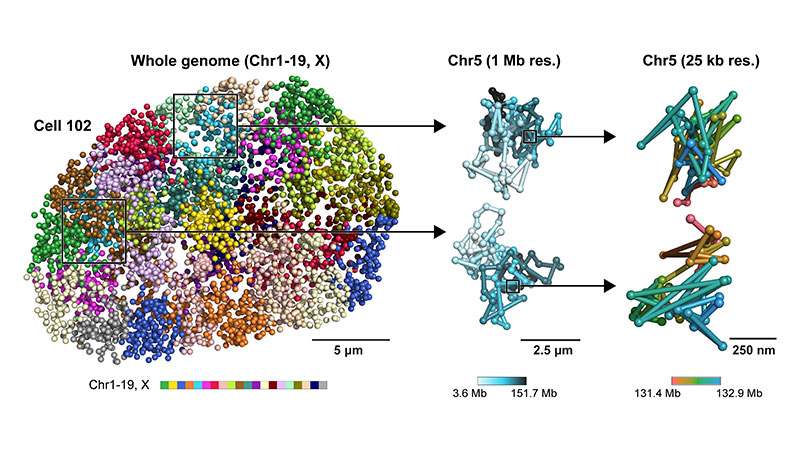 Delve into the big ideas of Cai Lab’s latest research in this interview with authors Yodai Takei and Long Cai. Read the article at caltech.edu

“The advantage of seqFISH+ is that it can actually see the intact nuclear structure at high resolution. While previous imaging technologies could illustrate chromosome organization, they could not simultaneously image DNA, RNA, and proteins at a large scale. seqFISH+ integrates the strengths of these existing technologies to give a full picture of what is happening in a cell’s nucleus.”

“seqFISH+ has already provided insights into nuclear structure. The team, led by graduate student Yodai Takei, presents several new major findings. First, the team discovered that certain segments of the genome are positioned on the surface of nuclear body structures. The study suggests that these regions are not random; spatial proximity with nuclear bodies occurs in a deterministic way, meaning that nuclear bodies could act as “scaffolds” of the genome. Second, the team found that these interfaces between DNA and nuclear bodies agreed with previous findings about DNA-protein interactions that had been discovered with ChIP-seq, a technology that was developed in the Caltech laboratory of Barbara Wold (PhD ’78), Bren Professor of Molecular Biology. Finally, the team reported that the nuclear state is very heterogeneous between different cells—more so than was previously realized—suggesting directions for future studies.”